As a hub for Teamwork, Microsoft Teams brings together apps alongside chat, calling and meetings. These apps can be proprietary Microsoft apps, third party apps or custom apps which have been uploaded via the app store. In using such apps, members of the team may have specific apps which are their favourite; ones which they either want to access quickly, or ones that they may need to access several times a day. They may need to have it to hand in order to demo or to evaluate in front of peers or customers. Following on from the recent blog which outlined channel pinning, the team can now also pin apps to the app bar. Channel pinning supplements app setup policies and make the whole app experience fit the user, saving time and increasing productivity

1.) In the Teams Client, select the ellipsis in the app bar (left rail)

2.) Search for the app, in this example Shifts

3.) Hover over the app and select the ellipsis then select Pin

4.) The app is now pinned to the app bar

1.) In the Teams client right click on the app and select Unpin

2.) The app is removed from the app bar

Every app setup policy, including the global org wide default contains the ability to turn app pinning on/off for users to which it is applied 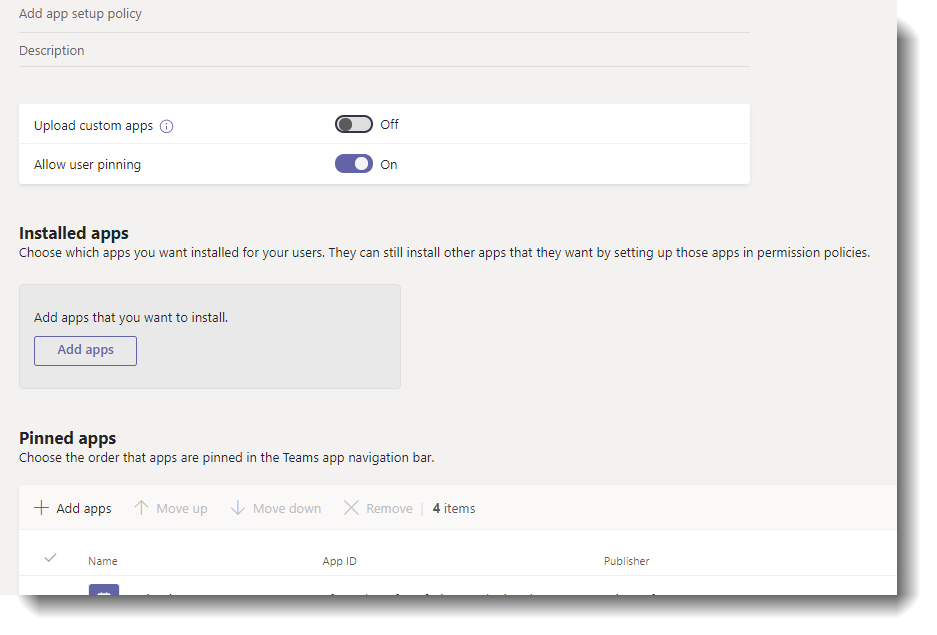 CAN CUSTOM APPS BE PINNED?

Yes, but the availability of custom apps is dependent on whether they are turned on in the org wide app settings in the Teams Admin Centre

No, not all apps are supported for pinning, so there are differences between the pinned app pane and the store

The mobile experience for IoS and Android, defined by Microsoft is that ‘users will see core Teams apps such as Activity, Chat, and Teams, and you can pin some first-party apps from Microsoft, such as Shifts. From personal experience, custom apps also appear

1.) In the Teams Mobile app, swipe up the horizontal bar above the app bar at the bottom of the screen

3.) Pin the apps under More Apps by dragging and dropping them into one of the first five slots using the hamburger icons (which look like justify icons)

The app bar has changed. Here you can see that Saved and Files have been pinned whilst Calendar and Calls are unpinned. Select Done when complete

Our work here is done

App pinning – like channel pinning – is another great customisation of the Teams UI which is all about personalising the UX, saving time for the user and increasing productivity for the organisation. Teams has to fit for each and every user, and hopefully the mobile experience will have parity with the desktop/web in the future!

One thought on “Teams Real Simple with Pictures: Pinning Apps to the App Bar”